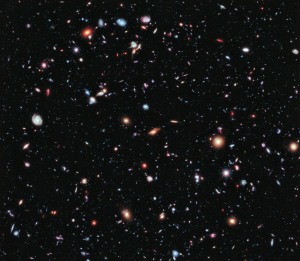 When Albert Einstein developed his general theory of relativity, he and other scientists thought that the universe was static, neither expanding nor shrinking. But the calculations in his new theory implied that the universe was expanding or perhaps contracting. Einstein thought that there must be some unknown force that caused the universe to remain static. He added a letter in his calculations that represented this unknown force. That unknown force is known as the cosmological constant. However, soon after Einstein developed his theory, scientists discovered that the universe was not static, but instead, it was expanding. When Einstein was convinced of this expansion, he came to believe that his guess that there was a cosmological constant was a big mistake. This, however, is not the end of the story. Scientists assumed that after the Big Bang the expansion of the universe would slow down more and more due to the effect of gravity. To their great surprise, they have instead discovered that currently the expansion of the universe is actually speeding up. There is only one explanation. There truly is a previously unknown force in the universe that is acting to repel the force of gravity. The astrophysicists have now reinstated the cosmological constant, which represents this mysterious force that acts to oppose the force of gravity. Scientists now call this force dark energy. Even though they know very little about its cause, they know it exists because of their observations of the increase in the speed of the expansion of the universe, gravitational lensing, and other evidence.

Now we get to the really interesting part of all of this, the part that strongly indicates that a personal, super-powerful, intelligent being must have caused all of this.

Even non-theists are amazed by these findings. Nobel Prize winning cosmologist and prominent atheist, Steven Weinberg, says this:

“Opinions differ as to the degree to which the constants of nature must be fine-tuned to make life necessary. There are independent reasons to expect an excited state of carbon 12 near the resonant energy. But one constant does seem to require an incredible fine-tuning: it is the vacuum energy, or cosmological constant, mentioned in connection with inflationary cosmologies.”

Although we cannot calculate this quantity, we can calculate some contributions to it (such as the energy of quantum fluctuations in the gravitational field that have wavelengths no shorter than about 10^-33 centimeter). These contributions come out about 120 orders of magnitude larger than the maximum value allowed by our observations of the present rate of cosmic expansion. If the various contributions to the vacuum energy did not nearly cancel, then, depending on the value of the total vacuum energy, the universe either would go through a complete cycle of expansion and contraction before life could arise or would expand so rapidly that no galaxies or stars could form.
Thus, the existence of life of any kind seems to require a cancellation between different contributions to the vacuum energy, accurate to about 120 decimal places.”

Even before the super-extreme precision of the cosmological constant was discovered, Sir Fred Hoyle, based on other evidence, expressed the situation this way:

“A common sense interpretation of the facts suggests that a superintellect has monkeyed with physics, as well as with chemistry and biology, and that there are no blind forces worth speaking about in nature. The numbers one calculates from the facts seem to me so overwhelming as to put this conclusion almost beyond question.”

Sir Fred Hoyle, “The Universe: Past and Present Reflections,” Engineering and Science 45 (November 1981): 8–12